X
This site uses cookies to provide and improve your shopping experience. If you want to benefit from this improved service, please opt-in.
More Info
Accept Cookies
Summer Sale Up To 60% Off - Shop Now
Urban Surfer | BlogGeneralUnwritten rules of the skatepark
Menu
General, Skate

Unwritten rules of the skatepark

Ed here again with this month’s blog, before I start, I just want to say that yes I am aware of the irony of calling it unwritten rules of the skatepark then writing them down.

Hopefully some of these you will have figured out yourself already, don’t worry if you haven’t we all start somewhere. I’ll start with possibly the most important;

Don’t be a snake!

Nothing to do with attention seeking posts on social media where your friends will comment “are you OK hun?”

Being a snake in a skate park where you cut in front of people go across the middle of their line, imagine a person who jumps a queue but instead of you having to wait an extra couple of minutes to buy your sausages it results in you falling down a ramp.

Now if you ask most people at the park they will say it’s the scooter kids who are the worst for this (while there is some truth in) anybody can be guilty of snaking, it can happen by a simple mistake, ignorance or purposefully, I’ve seen (and felt) bad accidents happen from people being a snake, with both parties being on the receiving end of damage. Skateparks are busy make sure your aware of your surroundings, and if you’re unsure if it’s safe to take your turn just ask.

The skatepark is not a daycare.

This one is for the parents, it is totally fine to bring your two-year-old to a skatepark , but don’t just leave your child to run/ride/skate around like you would in a normal park , there’s older kids and adults going very fast and skateparks have blind spots so if your kids doesn’t know that somebody might come over a wall they’re next to or that somebody can come round the corner very fast towards them it could very easily result in a trip to the hospital, so the best way to stop your kids getting hurt stick to the quieter areas of the park, if you’re unsure if the part your at will be safe, ask one of the better riders in the park and they should be able to suggest which area of the park will be suitable, try avoid the busy times you wouldn’t take your kids to lay on a field while there’s a rugby match going on, so lease keep an eye on your kid, nobody wants to be the one to land on a small kid.

The ledges are not seats

Just because something looks good to sit on doesn’t mean it is, most of the ledges around a skatepark are for doing tricks on, not for sitting sometimes even the benches are there to skate rather than sit on, and this one is probably one of the easiest mistakes to make so if you’re unsure just ask somebody.

By all means, have a game of skate while you’re at the park but don’t do it at the bottom of the bowl while people are trying to skate it, this one is kind of similar to the others where it boils down to don’t get in the way. So find a nice little quiet corner and skate your games of skate safe in the knowledge that you’re not going to annoy anybody by getting in their way.

Don’t try to one-up everybody!

Basically don’t be a show off, if you see somebody trying their hardest to ollie a set of stairs don’t just roll to where they are the flip them first try just to show off, nobody cares if you can do it better than them shrink your ego and perhaps take a leaf out of that person’s book and go find something to push your skill level, you’re learning nothing by putting others down. That being said that doesn’t mean you should hold yourself back just because other people aren’t as good as you, it’s all down to your intent for doing the tricks.

Hold off on the wax

Not everything needs a load of wax. It probably grinds just fine you just need to go faster, if you still think that it needs waxing check with anybody else who’s skating it to see if they agree, then if they do, you can put some wax on it but don’t put too much on as a rule just a quick light once over should be enough, try it out see how it grinds after that, if that’s not enough another once over, then repeat until it grinds, don’t spend 5 minutes scrubbing your wax into the ledge like your trying to clean three week old dried soup from your kitchen counter.

Don’t leave your litter lying around the park

Nobody wants to spend most of the time in the park avoiding empty crisp packets and broken glass, every time you don’t use the bin at a park your contributing to the crap that you need to avoid, if you do end up picking up somebody else’s rubbish because it was in the way don’t just throw it to a different part of the park put it in the bin. 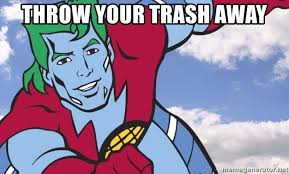 Throw Your Trash Away!

When you see somebody trying a trick and pushing themselves encourage them, give them praise when they land it, who doesn’t like being told they’re doing something good, there’s too much negativity in the world already, so why not put some positivity out, you might just make their day.

As always just have fun, it’s what skating is all about.

Don’t forget to check out our social media platforms;

Urban surfers youtube channel for some videos by me and the rest of the team.

Thanks for reading guys. Now go out and skate!

SkateboardingSkateparkUnwritten Rules of the Skatepark